skip to main | skip to sidebar

A brief introduction, with pictures, to my favorite book by my favorite author-illustrator, William Pène du Bois 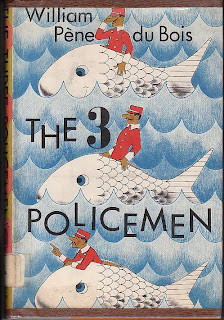 *note to all- I want you to know that my quick, short & snappy synopsis of the storyline is in no way indicative of or worthy of the witty, lighthearted inventiveness of William Pène du Bois' fantastic story.  I regret that I am undoubtedly unable to convey this sufficiently, but hope to interest you enough that you may seek it out and read it!*


The three policemen live, along with a number of other happy people, on a mysterious and rather unknown island called Farbe.  So happy are the Farbons, who are all fishermen except for the three policemen and their aide, Bottsford, that there is no crime.  Ever.  It is for this reason that the policemen's mettle has never been tested!   In fact:

"In their spare time, which is almost anytime, the three policemen design and make their own uniforms, which get more and more elaborate.  This seems to be their only work." (p. 10)

Here are the policemen readying themselves in the morning:

(they have an album recording that plays the 'bongs' and 'pling' along with instructions as to what exact part of their toilet they should be attending.)

Inevitably, crime does come to Farbe Island- one morning, all of the fishing nets are stolen!  The islanders gnash their teeth and pound the earth in very dramatic despair: 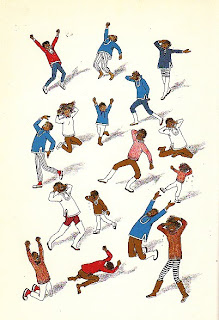 A meeting is called; witnesses reveal that the culprit is... a sea serpent! 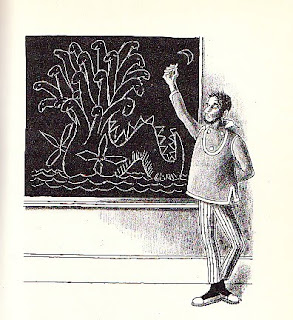 A plan is hatched! The plan involves a quantity of poison, and...new costumes for the policemen- fish suits! 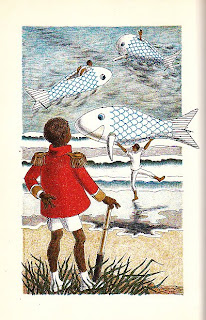 Young Bottsford, who is, of course, the brains of the operation, has his own, smaller, fish suit, in which he follows the three policemen out to the sea serpent, which turns out, strangely enough, to be not a sea serpent, but a giant boat SHAPED like a sea serpent! 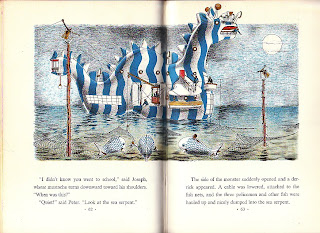 They board the ship, and when sailors cut the heads off the 'fish', they spring out! 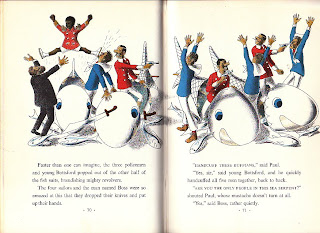 This is the best image- look at Bottsford's mighty kick!  The criminals are taken into custody.  During the trial, Bottsford (naturally!) realizes and reveals that the boat's captain is none other than their own mayor- who concocted the whole scheme in order to test the policemen, and also to provide the Farbons with a beautiful luxury ship (in the shape of a sea serpent, which, apparently, is very popular in other countries!) in which to travel and see the world.  The three policemen are presented with medals and beautiful new costumes, and Bottsford is made Emperor of Farbon (and receives a miniature Ferrari!).

The inside dust jacket reveals a cross-section of the sea-serpent boat: 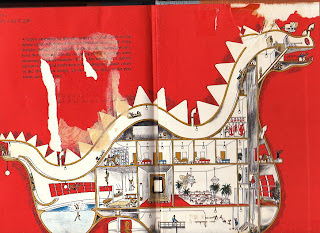 (sadly, my copy, an ex-library book, is not in the best condition)
Posted by Amanda Crawford at 9:21 PM 3 comments: